My Story So Far

It's all a bit of a blur, you know, the hectic party life of a puppy, so I don't remember the details. My temporary human, Maria, at the rescue shelter said this:

"We really don't know much. What we do know is that you were wandering in a neighbourhood for about a month or so and some people were feeding you and then someone else complained about you and asked the municipality to come and take you to the pound, which they did. We all know that they put dogs to sleep there, so as soon as one of the people feeding you found out where you were she went and took you and asked us if we could take you in as she already had two dogs that wouldn't accept you. So you ended us with us 🙂""

I think I'm about twenty one years old (that's three in human years), so there is a lot of time unaccounted. It probably wasn't easy. I don't think I've really lived in a house and properly known a human before. 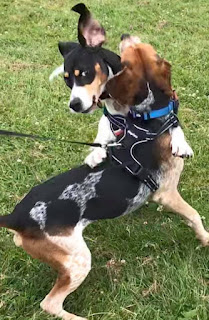