July 12, 2020
Well I've been very busy. Very busy. I meant to update this on Friday which was exactly a week after I got here and adopted AndyHuman, but I'd had a lot on. A lot on.
I said before about his mental state, and I need to update you about that, it's getting worse. Worse, I tell you, worse.
So not only does he constantly ask me who's a good boy, even straight after he's just told me that I'm a good boy, but he does other illogical things. Like on Friday, he came down from his secret place (he thinks it's secret and I don't know, but he forgets I can hear him clomping about upstairs after he's closed that door), anyway, yes, he came down with a box with lots of his clothes in it. They all smelt lovely of him. Lovely I tell you, lovely, just how he smells. So this is what he did - he really isn't very clever. He put them all in this big white box thing in the kitchen. He put them in through the little round window, and then it started making noises. After ages he took them all out and they didn't smell of him any more! He's mad! It's going to take him ages to make them all smell of him again.
Also he's not very good with communication. I try to tell him things and he just doesn't get them. He just about understands now, but it's taken ages, when I've done a poo in the garden and I want him to come and clear it up. I come in to where he is and try to encourage him to follow me outside, but it takes a few times before he understands. I've no idea how I'd tell him anything more complex, like if a small boy got trapped down an old mine shaft.
These failings aside, I do like him. I'm lucky, lucky I tell you. I have only one human to look after. I've realised that some of the dogs I meet have more than one. Sometimes two, and sometimes two with some puppy humans as well, like maybe four or more humans, with only one dog caring for them. That must be tough. Tough.
There are lots of stray humans too. Some of AndyHuman's friends aren't cared for by any dog. I try to be extra cute and playful to encourage them. Silly humans, I say, silly humans. They don't seem to realise that if they don't fill in some forms they might stay as stray humans forever and never get looked after properly by a dog.
The dogs here are really friendly, and I'm now meeting lots of them when I take AndyHuman for a walk. Always up for a mutual sniff, and a bit of pouncing, unless they are too busy with their human.
It was quite warm today. Not as warm as Cyprus, but not bad. It's times like this that I realise that AndyHuman isn't too bad. He'll carry water in a bottle for me, and a bowl.
We did two walks today, and also had some time with three stray humans. One of them is ChickenHuman who has realised that I like chicken a lot. I really think she needs to be adopted by a dog, so I'm trying to encourage her, and I'll put word out in case there are any dogs in my network that might want to adopt her. She's probably a good bet. 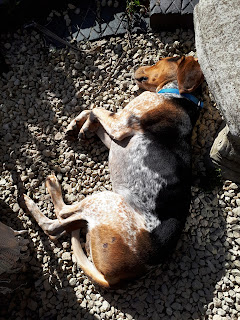 One of AndyHuman's pups has gone to somewhere called Leeds, not to be confused with the more obvious Leads. Not to be confused. I might get him to take us there to see her. I like her. His male pup is great too.
Pretty good. It's been a pretty good first week. I do have a bit more to do than I'd imagined, what with looking after AndyHuman, but mostly I can sleep, eat, or walk, which is all a dog needs. All a dog needs.

I've been meaning to tell you about Alexa. As far as I can tell AndyHuman has had Alexa living in my house since well before I arrived. I'm going to confess that I didn't really know who Alexa was when I first got here. I'd hear AndyHuman talking to her, and she would say things but I could never see her. She could be in any room, but, I thought, even better than me at hiding. Then I found out that she lives in some kind of cloud. Yes, I did say cloud. A cloud. That's where she lives. I can't see this cloud, but at least I know why I can't see Alexa. So yeah, there's Alexa living with us too. She's supposed to be some kind of assistant, but let me tell you, if this is AndyHuman's ability to do training, he's sadly very lacking. He tells her to do something, like play Puppy Love, Who Let the Dogs Out, Hound Dog - you know, proper music - and she quite often plays something else, or he'll ask her, yes he will, to turn on some lamp or other,
Read more

Well you already know I share my new house with AndyHuman, but I need to tell you about two others that are here. One of them is called Bin. Bin lives in the kitchen. In the kitchen I tell you. Lives there. All that Bin ever does is eat rubbish. Honestly, just rubbish. I eat most of my food, but sometimes there is a bit left in the bowl, and AndyHuman eats most of his too. What we don't eat though, Bin has. AndyHuman just puts it straight in Bin. If I try to sniff Bin I get a sharp "No!" from AndyHuman, so I don't because I'm training him and need to be careful. However, one time when AndyHuman was in another room I had good sniff of Bin and tried to have a look in Bin's big opening mouth. You'll never guess what happened! Bin fell over and was sick on the floor - all bits of old food and other rubbish. I had to get AndyHuman to clear it up. I've not been near Bin since. Henry is the other occupant. Henry, I tell you. What a name!! Henry moves about on
Read more